You are here: Home1 / The Children of Fatima 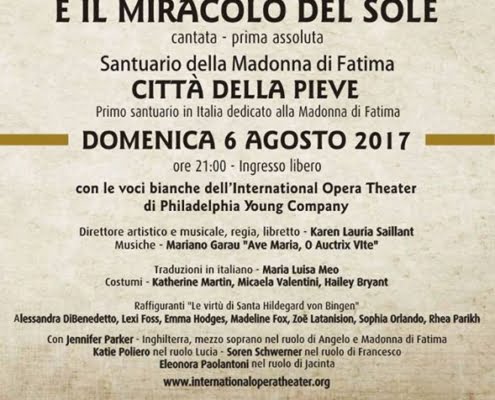 Fatima Centennial 2017 & International Opera Theater of Philadelphia are proud to announce that world renowned sacred music composer, Mariano Garau, will compose the music for our 4th world premiere cantata which will celebrate the 100th anniversary of The Apparition of The Madonna of Fatima to the young shepherds: 'The Children of Fatima & The Miracle of the Sun'.

With libretto by Karen Lauria Saillant & Christian Bygott & Italian translation by Maria Luisa Meo, the premiere will occur on August 6, 2017 in Santuario Di Fatima in the gorgeous Comune di Città della Pieve where you find the first shrine to Fatima in all of Italy.

The production is under the auspices of Assisi Suono Sacro Festival and Adagio Art Agency and will feature beautiful English mezzo soprano, Jennifer Parker, as The Madonna and 11 children from The Philadelphia Area singing the roles of the children and The Virtues named by Hildegard.

One of the most beautiful projects International Opera Theater of Philadelphia has ever created! Such gorgeous young sopranos singing SUCH BEAUTIFUL MUSIC SO BEAUTIFULLY PERFORMED!!! Feelings SO BLESSED!!! Mariano Garau - INCREDIBLE- superlative sacred music composer!!! 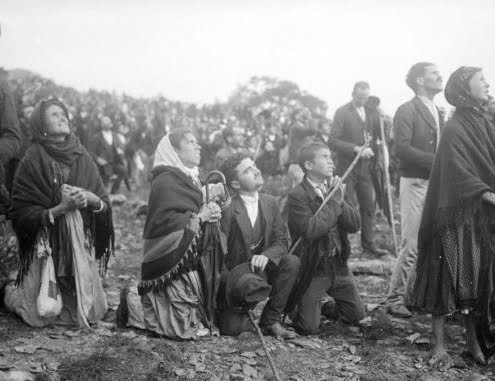 The Children of Fatima and the Miracle of the Sun

Sunday 6 August at 21.00 Assisi Suono Sacro closes, as per tradition, with an appointment signed by Adagio Art Agency with the International Opera Theater of Philadelphia in collaboration with the Santuario Di Fatima di Città Della Pieve and with the patronage of the Comune di Città della Pieve and Proloco Associazione Turistica Pievese. On the occasion of the celebrations of the centenary of the apparition of Fatima, a performance will be offered at the Sanctuary of Our Lady of Fatima in City of Pievethe first in Italy dedicated to her, the world premiere of the cantata The Children of Fatima and the Miracle of the Sun.

The project is written and directed by Karen Lauria Saillant to music by Mariano Garau drawn from and inspired by Hildegard von Bingen.

And with Jennifer Parker, mezzo soprano as Angel and Madonna of Fatima Katie Poliero as Lucia, Soren Schwerner as Francesco, Eleonora Paolantoni as Jacinta.

Costumes are by Katherine Martin, Miacela Valentini and Hailey Bryant. Translations into Italian are by Maria Luisa Meo.
The project enjoys the patronage of the municipality of Città della Pieve and the Proloco Associazione Turistica Pievese.

ATTENTION: If you continue to browse the site you are consenting to the use of cookies.

We may require cookies to be active on your device. We use cookies to let us know when you visit our websites, how you interact with us, to enrich your user experience and to personalise your relationship with our website.

Click on the different category headings to find out more. You can also change some of your preferences. Please note that blocking certain types of cookies may affect your experience on our websites and the services we are able to offer.

These cookies are strictly necessary to provide you with the services available through our website and to use some of its features.

These cookies collect information that is used in aggregate form to help us understand how our website is used or the effectiveness of our marketing campaigns or to help us customise our website and your application to improve your experience.

If you do not want us to monitor your visits to our site, you can disable monitoring in your browser here:

We also use various external services such as Google Webfonts, Google Maps and external video providers. Since these providers can collect personal data such as your IP address, we allow you to block them here. Please be aware that this may severely reduce the functionality and appearance of our site. Changes will take effect once you have reloaded the page.

Accept the settingsHide only the notification

English (UK)
Start chat
1
Contact via Chat on WhatsApp
Hello. I am Mariano Garau. You can comfortably write to me here to start a conversation on WhatsApp chat. Greetings.